The Modern Medieval is out now…

Something for Kate’s brand new album, The Modern Medieval, is out now. Get it from HERE

Brilliant. Every song is a damn winner!” – DOUBLE J

Extraordinary! Something For Kate’s seventh album The Modern Medieval is remarkable. – HIFi Way

Something for Kate have returned with one of their finest albums to date, with ‘The Modern Medieval’ leaving them feeling like a new band once again.” – ROLLING STONE

★★★★ Its (Dempsey’s) competing impulses that make this record so engaging, from the balancing of hope and pessimism to the mingling of every day emotion with heady philosophy or science fiction. – The Australian

Musically Something for Kate have never sounded more adventurous..thematically have never been more focussed. –NME

9/10 The Modern Medieval is a product of skilled and measured abandon. – Beat Magazine

This is a seriously great band. Paul Dempsey knows how to craft a multi-layered masterpiece. His songs are beautifully constructed soundscapes” – STACK MAGAZINE

Something For Kate are a true national treasure: I’m still under theimpression that Paul Dempsey has never written a bad song, and alongside the rhythm section of Stephanie Ashworth and Clint Hyndman, the band form a sonic force that’s nothing short of perfect.” – MIXDOWN

Extraordinary! Something For Kate’s seventh album The Modern Medieval is remarkable. Creative mastermind Paul Dempsey is a deep thinker and the intensity he brings to these songs is really something to behold. Fans no doubt have been hanging for a while since 2012’s Leave Your Soul To Science but the wait has been more than worth while – HiFi Way

Its their most ambitious, determined and intriguing body of work yet – and goddammit, they hit every notch on the goalposts with effortless aplomb” – AUSTRALIAN GUITAR

The Modern Medieval is the sound of a band that’s fiercely opposed to doing things by halves. The album features ten songs that defy conventional pop-rock formula while doing nothing to dampen their anthemic potential. – Music Feeds

This is the sound of a band whose members have thrown down the gauntlet to each other…  to create a towering edifice of song that is held together with crackling energy.  The songs on The Modern Medieval push and pull internally and up against each other as if they might simultaneously implode and explode.  There’s enough combustion on this album that you can sense its tang as you listen. The Modern Medieval is a fecund, sumptuous buffet for lovers of Something For Kate that is sure to win them new listeners- Around The Sound 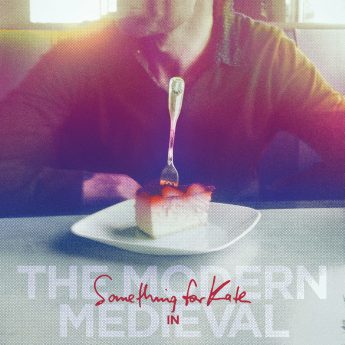