Something for Kate head to Texas to record new album 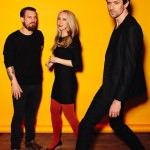 We are very excited to announce that Something for Kate will travel to Dallas, Texas to record their brand new album with U.S producer John Congleton. ( Explosions in the Sky, The Walkmen, St Vincent, Okkervil River ) The album, which is yet to be titled, is expected to be released later in the year.
The band will be blogging from the the studio here on somethingforkate.com, posting snippets of what they’re working on plus posting photos on their instagram account and generally keeping you up to date with progress on the album.

Stay tuned here & on the band’s facebook for further information…