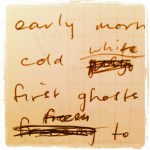 The three have been working away in the studio in Melbourne writing and recording demos, for the new record which is set for release in 2012. As the writing period nears completion, details will soon be announced  regarding the album recording.