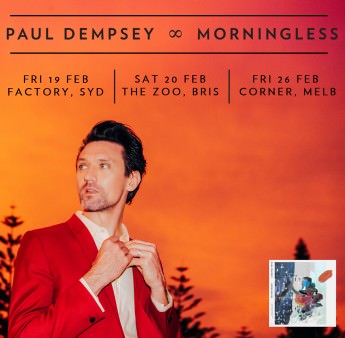 Having just completed recording his 2nd solo album at Wilco’s Loft studio in Chicago, Something for Kate frontman, Paul Dempsey is hitting the road with his full band for the first time in over 5 years for a select series of shows to celebrate the release of his new single, Morningless.

Previewing new tracks from his forthcoming album (to be released later this year) Paul will also play favorites from Everything Is True. This tour offers a rare opportunity to see Paul with his uncommonly talented band at close quarters ahead of album release.

Joining Paul in support will be one of Australia’s finest young songwriters, Fraser A Gorman.

Absolutely one show in each city only.

Morningless single out now! Get it HERE