We’re most excited to announce that Something For Kate’s Paul Dempsey will play 3 solo shows in 3 cities this November.
Taking in Brisbane, Sydney & Melbourne, these shows will see Paul in his element, with just an acoustic guitar, a whole bunch of Paul Dempsey solo songs, SFK material and an exceptional knack for picking a great cover..

TICKETS ARE ON SALE NOW FROM PAULDEMPSEYMUSIC.COM 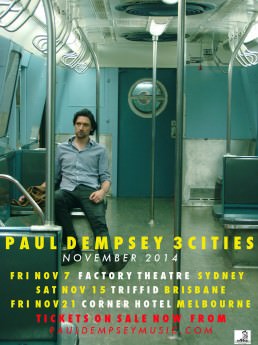 *The Triffid is Brisbane’s brand new venue owned by Powderfinger’s John Collins – The Triffid will open in early November. Read about it HERE