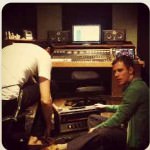 I woke today with some great news, and also Wilco: ‘Dawned on Me’ on the radio so I had a good feeling going into the studio today after another tough day of blisters and drums yesterday!
We tracked a song which is the last one to be written for the record… at the moment (you never know when PD is going to come up with lyrics for another)
I also picked up a book that was sitting in the studio call ‘Our Noise: The Story of Merge Records’ and started reading it. Inspiring book as it re-tells the story of a couple of people starting up a band (Superchunk) and a record label (Merge). It took me back to when PD and I used to trade tapes at high school (He gave me Superchunk and I gave him Bad Religion) and then we started this band.
Now we’re in Texas making a record all these years later and it still feels brand new…
CH