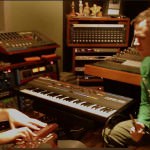 You may think we’re getting a bit lazy with the reportage. I can offer a couple of excuses. We can’t report on the first song played on the car radio each morning anymore because the subscription to satellite radio has abruptly come to an end. So theres now a whole bunch of silence in the car – which is actually rather nice before pummelling ourselves with constant noise each day.

The other thing is that its pretty busy in here. Producifer John’s hillbilly alter-ego, lets call him Hank, has decided that the most effective way to get good takes out of us is to hold up a knife to us while we’re playing. Here he is threatening Paul while he plays the Omnichord. Its quite effective. We are bringing out the worst in Hank. He pulled out some line dancing and Coors lite on us too. Frightening.
SA