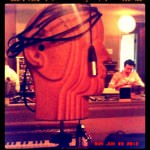 Recording Day #4
First random song on the car radio this morning: Candy by Iggy Pop & Kate Pierson…an omen?
Finished yesterday’s difficult number and moved onto a track called ‘Private Rain’ upon which the awesome saucer landed… Then moved on to a very new song which we’d never really played before and took us a little by surprise.
Dallas is also surprising. Today the city held their annual ‘Slut Walk’ where thousands of women gather to promote women’s rights and protest sexual assault – a tongue in cheek poke at the old adage that women should avoid dressing like sluts in order to avoid victimization.
I’m really enjoying the different sides of the city. Food highlight today was an incredible vegan place called The Spiral Diner. And the Mexican candy that I picked up at the Beer Store in Oak Cliff.
SA