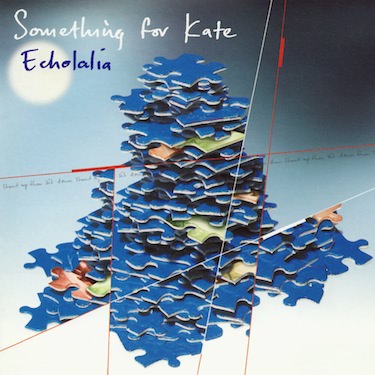 Something for Kate delivered a breakthrough release with their third album ECHOLALIA, released in Australia in 2001. The album was recorded at Mangrove Studios on Sydney’s north coast; and was co-produced by Trina Shoemaker (Wilco, Queens of the Stone Age, Sheryl Crow).

The first single lifted from the album was ‘Monsters’, followed by ‘Three Dimensions’, ‘Twenty Years’ and ‘Say Something’. The album package includes CD Extra multimedia containing the ‘Monsters’ video clip, and behind the scenes in-studio footage. The album achieved many accolades; including being voted Album of the Year by Triple J Listeners; and being hailed as Best Album, Best Band, Best Single [&] Best Artist in the 2001 Rolling Stone Readers Poll. ‘Monsters’ was voted #2 in Triple J’s Hottest 100 of 2001.

The album was released in the USA in 2002 by New York based label Red Ink.

The original vinyl pressing sold out and was followed by a second pressing which also sold out. It is currently only available on colored vinyl (3rd pressing released in 2018)